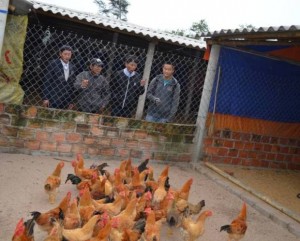 For a long time, people said that Trieu Van commune, Trieu Phong district was a coastal commune with most of area are exhausted white sands, its territory is sand hills and down sands. However, few people known that these “down sands” brought favour advantages in breeding for people here. Surprisingly, the model of breeding chickens in Trieu Van commune are mostly less epidemic. Chickens here are easy to sell and accepted by the market. Not only local people, but also communal veterinarian shared that. Especially, after receiving support of project “Strengthening adaptability and reducing climate change in agricultural production in sandy area of Quang Tri province” (project FCL-12-01) was funded by Embassy of Finland and implemented by Centre for Rural Development in Central, local people respected the chickens more. Taditional breeding chickens with epidemic management brought economic efficiency for most of households which were supported and guided techniques by the project.

Grasping local advantages, project FLC-12-01 supported people to implement model of breeding chickens with epidemic management and towards market-oriented economy. Chicken breeding which was supported by the project were straw yellow Vietnamese/local chickens which were provided by Livestock Breeding Institute in Hanoi. They were bred during 3 months and achieved 1,2 – 1,6kg/chicken. Mrs. Bui Thi Uyen in Sinh Thai hamlet added that “Local people prefer these chicken breeding. Selling price of chickens in the Lunar New Year is higher than normal days”. This Tet holiday, Mrs. Uyen’s family sold 50 chickens, an estimated 6 million VND. Or like Mr. Dinh Minh Tien’s family, with 100 children, after deducting expenses, veterinary medicine, his family profited more than 4 million VND. 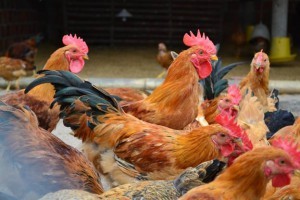 So far, there are 16 households receiving support from the project model of traditional breeding chickens with epidemic managements in Sinh Thai hamlet. The project has supported local not only breeding but also in market connection, found output for products with the most reasonable price. Not only chickens and green black pea in Trieu Van but also wild onion (Allium Odorum L), casaba melon in Hai Lang were connected to local businesses that helped people avoiding “having a good harvest, losing price” situation. This was anew point in the project and it has proven. From success of this model of breeding chickens, the project implemented sharing sessions of breeding chickens, study tours to replicate into community.